By HHF,
May 1 in The Indiana High School Football Forum

Coaching at the HS level is a HUGE commitment. Not just for the coach but for his family as well. I loved coaching, I loved practices, being around kids, teaching, watching them develop, watching them 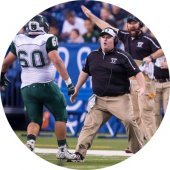 Bingo.   This is precisely why I am leaving my current position at Whiting HS.  I teach 3 middle school computer science classes (6th, 7th, and 8th).  Then in the high school I teach an AP Comput